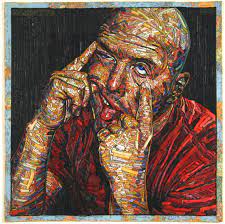 Image by Collage by Mary McCleary

The boy had been sent to the office of the principal by a teacher at her wits’ end. “He’s incorrigible,” she murmured and left him at the door. The principal took the heavy wooden paddle from his desk and with me as the required witness gave the boy the first of three strokes. I knew it stung. I had been paddled myself at the same age and for the same reason. But it was the boy’s response that unsettled me. It was not a smirk but an indifferent smile after each swat as if he were neither frightened or remorseful. He only grinned and when the punishment was finished stood up and left the room without a word as if nothing had happened. Often we say, “This hurts me more than it does you” and in this case that was true. I have never forgotten that smile.

In the book of Amos the prophet tells the people that God has declared them incorrigible and he is finally going to punish them - and harshly. All the previous warnings he had sent- drought, famine, revolutions, and plagues - had been ignored and none of it had made a difference in their behavior. If anything, they were dug in deeper. They had become so hardened that they, in the words of Amos, no longer knew how to do right. It’s not that they had tried and failed. There was nothing in them any longer that prompted them to do right. They had lost any inclination they might have had to do right.

﻿But punishment and discipline only work with those who respond to them. There is something unnatural about these people - like the boy - that makes them callous to the prospect of punishment. Something is dead in them.

﻿Paul writes to Timothy about those whose consciences are seared and then in Romans he writes about those who have exchanged the truth of God for a lie. In Isaiah we read about those who call evil good and good evil, who put darkness for light and light for darkness, who put bitter for sweet and sweet for bitter.

﻿I spent a little time this week reading about people who have no feeling, empathy or guilt. The term is “psychopath.”

﻿There are differences between psychopaths and sociopaths. Psychopaths tend to be more manipulative and charming. Sociopaths are more erratic, rage-prone, and unable to lead a normal life. But both are similar in their inability to experience guilt or the feelings of other people.

Why do I bring this up?  God says he will punish the people out of his love who no longer have any understanding of what that means. Is God wasting his breath?

﻿Studies of psychopaths have shown they fail to learn from punishment. In fact, they process rewards and punishments unlike most people. “Psychopaths are more likely to believe that no matter the option they choose, the rewards will come. When interviewed, criminal psychopaths sometimes sound indignant about their incarceration. They are surprised to be caught and think the punishment is undeserved.”

And the longer they have to think about the punishment the worse their decisions become over time. “Most of us are able to adjust our behavior pretty quickly when an action that had previously been rewarding suddenly becomes punishing. Psychopaths, however, persist at a given behavior even though it has become punishing.”

﻿In other words, punishment does not work on them. It’s not just individuals though. Small groups of people, like gangs, platoons of soldiers or even crowds can display psychopathic behavior where the wiring of their brains has been affected and they have truly lost the ability to do right. They are completely senseless and empty of all empathy. There is only grievance and numb ignorance. That is what Amos is saying here. He is not addressing one individual alone but a whole crowd of people who have become psychopathic. It is a sick culture.

﻿Perhaps, as many say, there can be no forgiveness without repentance. But, instead, this is perhaps what Christ meant when on the cross he said, “Forgive them, Father, for they do not know what they are doing.” They are beyond punishment as something in them has died. They do not know how to do good. They are emptied.

﻿What is left? What remains? Nothing but a waste of breath but the last word is still forgiveness, isn’t it? It’s not easy to accept but there it is. They no longer know how to do right so, Father, forgive them.