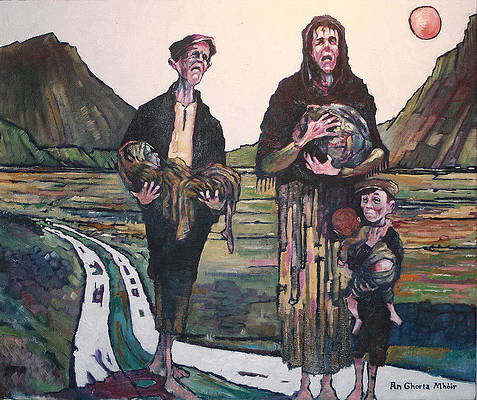 In the years between 1845 -1849, Ireland suffered one of the most destructive famines in history. Known as The Great Hunger, over 1 million people died by mass starvation and another million or more emigrated (and often perished) in “coffin ships” to other countries. Ireland lost almost 25 percent of its population and even now has never fully recovered. Every area - economic, demographic, political and religious - was affected by the famine. Like those experiencing famines in the Old Testament, the axis of their lives was violently tilted and they did whatever was needed to survive.

In the book of Amos, the prophet is told Israel will suffer a great hunger but it will not be from food or water. It will be a famine of hearing the words of the Lord. “People will stagger from sea to sea and wander from north to east, searching for the word of the Lord but they will not find it.” Not food but the words of the Lord will disappear. There will be no one to tell the truth; no one calling the people to justice. They will be overcome by corruption and lies for where there is an absence of truth it does not leave a vacuum. It is soon replaced by deception and partial truth or worse.

This could never happen here we say. Christian enterprise contributes $437 billion to the American economy every year. Christian book publishing introduces 7,500 new titles every year. With 350,000 churches, radio stations, television programs and products we can hear more religious content in a month than an Old Testament person heard in a lifetime. We are so inundated by “God talk” we do not realize we may not have heard the actual word of the Lord in years. God becomes Muzak. He is faint sound in the background. God is everywhere and nowhere at the same time and while we have not silenced him we have made him wallpaper. We are in a famine of the Word while being drowned in words. “Water, water everywhere but not a drop to drink”

It could be said in our time that God chatters but he does not speak as before. If you are on Twitter you are familiar with the format of 140 characters until recently being the most you can use. Everything is compressed. For instance, these are typical Twitter quotes from Christian authors: “Let what is, be.” “Plant hope, harvest joy; plant fear, harvest doubt.” “Love each other now like you’re the warm up band for eternity.” “Anger is a symptom of soul anemia.” “Prayer is the hand of faith on the door knob of your heart.” None of these are bad – they just create a taste for what is superficial and quickly evaporates.

We assume primitive people have simple languages that are not complex but linguist Dan Mrejeru writes it may be just the opposite: “Once a group gets civilized or modernized, the structure of the language undergoes simplification, often massive simplification. The more civilized or modernized the language, the simpler and more dumbed-down the structure of the language is. The reason is that in a modern society, everything is rush rush rush, and people want to get concepts and whatnot across in the simplest and quickest manner.”

We don’t have time to genuinely engage and our language deteriorates into a collection of snippets and phrases – but not sentences and paragraphs. Consider how we like our ideas and beliefs packaged, refined and reduced to make them easily consumable. Have you been reading about fake foods? Producers are adulterating their products with substitutes that while not perceptible are cheapened products. That is what happens when people take the Word of God and cheapen it or turn it into slogans and memes. There is artificial taste but no nourishment.

The Word is becoming a commodity. There is not a famine of quantity but a dilution of quality and truth - a famine of substance. It is far too much work to hear the word of the Lord unless it is entertaining, memorable and quickly absorbed. Donald Miller writes our brains like simplicity that will not use up energy trying to grasp complexity. Our souls can become the same. We want things packaged for easy consumption.

We have become sophisticated about so many things – investments, brands, online shopping, education – but less so about our understanding of God. We want it even more simplified and formulaic. We want inspiration – not saturation. We do want a word from The Lord but that is literally what we want – a single word or at most a neat phrase.

Unfortunately, Israel had no time to get ready but we do. We can be prepared for the great hunger.