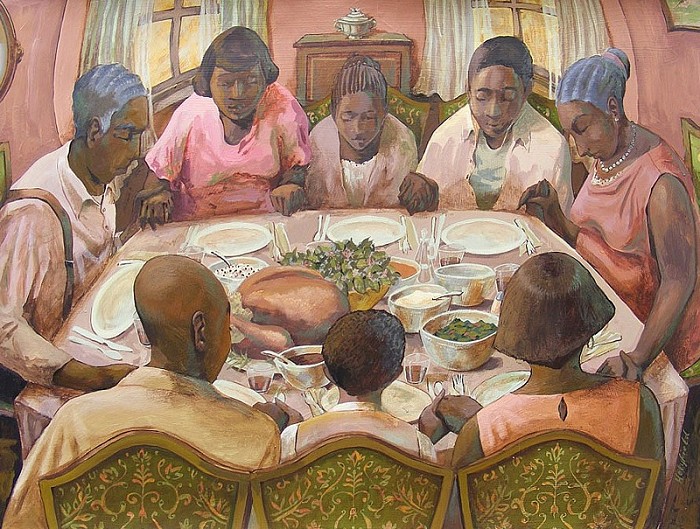 He and his wife had lost their son and someone with the best intentions had quoted Paul’s instructions to the church in Thessalonika, “Be thankful in all circumstances, for this is God’s will for you who belong to Christ Jesus.”

Then was not the time to say, “Paul did not say be thankful for everything – but thankful in everything.” Yet, that is what I thought about for days afterwards. Paul says, literally, eucharisteo, in everything and in every circumstance – no matter what – eucharisteo – give thanks.

I grew up Southern Baptist so we never heard the word eucharist. I think that was something the Episcopalians across town did on a pretty regular basis. At least they mentioned it a lot. We were non-liturgical – just like the authentic Christians of the early Church. What they called the Eucharist we called the name Jesus gave it – the Lord’s Supper. We did it four times a year and attendance always dropped sharply. So, it was only years later I discovered the Episcopalians were all along doing what Paul told the Thessalonians. They were giving thanks all the time – eucharisteo.

Scattered throughout the whole New Testament you’ll find this word.

The lone Samaritan leper who returns to Jesus throws himself at the feet of Jesus and gives thanks.

Jesus at the tomb of Lazarus gives thanks.

The church at Jerusalem gives thanks to God for the collection on their behalf.

You cannot avoid it. It’s everywhere you turn. People giving thanks.

People are changed and give thanks. People give thanks and are then changed. Even in Romans Paul describes the awful effects of people who fail to give thanks. “For even though they knew God, they did not honor Him as God or give thanks, but they became futile in their speculation, and their foolish heart was darkened.” Giving thanks is not a mere formality or pleasantry, is it?

But something else becomes clear as you read the passages. There is a connection between eucharisteo – thanks – and breaking bread. Not wafers but real food. Several courses, in fact.

In feeding the 5,000 he broke the loaves and gave thanks.

At the inn at Emmaus it was when Jesus broke bread and gave thanks that the disciples recognized him for who he was.

‍Eucharisto is part and parcel with breaking bread. There is something about food and gratitude that we don’t want to miss. Something happens when we break bread and give thanks.

Here is what I’ve come to realize.

Breaking bread is something we do with others. It is something that is shared. There is a connection between eating together and being grateful that is unique. This is the best way to give thanks – to do it while eating with others.

I started thinking about Paul’s words to the Thessalonians and I could hear him saying,

“In the midst of everything in your life eucharisteo and break bread together.”  Take care of each other that way. Lean on each other and carry one another’s burdens.

In sorrow and in joy – give thanks and break bread.

In birth and in death – give thanks and break bread.

In gain and loss – give thanks and break bread.

In sickness and in health – give thanks and break bread.

In laughter and in sadness – give thanks and break bread.

In grief and in glory – give thanks and break bread.

Let’s not quarrel about politics or all the ulterior motives of our opponents this year. Let’s not make a day of celebration into a raucous feast of squabbles and controversy. Instead, let’s focus on breaking (and buttering) bread, carving turkey, scooping potatoes and slicing pie with each other while giving thanks. We can call it Thanksgiving or the national Eucharist or even Turkey Day but let’s not forget what we have known from our founding. In spite of our losses, disagreements, sometimes shameful behavior and sins or what Lincoln called “national perverseness and disobedience” we can instead focus on his final words that we would “fervently implore the interposition of the Almighty Hand to heal the wounds of the nation and to restore it as soon as may be consistent with the Divine purposes to the full enjoyment of peace, harmony, tranquility and Union.”

Break bread and give thanks.