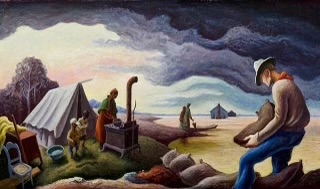 From the first days of the Church there have been competing beliefs about the second coming and end times. Yes, there were and are false teachers but most of the confusion has resulted from jumping to conclusions about certain signs, overly excited imaginations or just different readings of Scripture. Why else would we have pre/post/a millennial interpretations? Why else would we have an end times industry?

From the outset there have been two major perspectives on the role of the Church in the world as we await the second coming of Christ.

There is the conquering Church– the Church triumphant. There are those pursuing dominion in the world and, in truth, they can relieve the world of some of the effects of the sin that is in the very nature of the world. We can combat and sometimes win over slavery, disease, poverty, injustice, and crime.

Then there is the restraining Church. This is our holding out against the flood of evil through our constant struggle to restrain a force that desires overtaking us. We’ve all seen pictures of communities being flooded by the Mississippi. Everyone is engaged in filling and piling sandbags to hold back the water. The river keeps rising while the people keep stacking to contain the flood until the waters recede or the town is destroyed. No one sits by and watches.

We need both churches in this world. The church that alters the effects of a fallen world and the church that fills and stacks sandbags against the flood to restrain it. Neither is adequate on its own.

The restraint of evil is not a one front war. It is billions where every life is a point of defense against the power of lawlessness. Every person, family and church is a front against a power that never sleeps and is relentless in its desire to break in and steal. What you do to resist evil affects me and my resistance affects you. Every time you tell the truth when you could have lied; every time you forgive instead of remaining angry; every time you pray or act with integrity you are restraining the power of hopelessness and lawlessness. No good act is neutral. It is one more sandbag stacked against the flood. This is the “secret power of goodness” about which Paul writes.

We are engaged in a long drawn out war – and yet we recruit people by telling them they will be happy and at peace when they join us. We tell them Jesus “gets us” but never tell them about their responsibility to everyone else – only about the benefits of joining up and getting a uniform. We don’t tell them they have enlisted in a protracted struggle.

There will be in the future a time of no law, restraint, truth, hope, and pleasure. Only complete delusion. The disguise of evil will be removed and the mask peeled off. Evil that has been invisibly boiling below and ever present in the world will be revealed. That is the meaning of the word “apocalypse” – it is a revealing of what has been hidden but already at work. It is not an invasion from the outside but what has always been present but restrained by the Church.

The Church will not be here for that. Just as Noah was taken out before the flood and Lot taken out of Sodom before destruction, the church will not go through these times. Instead, goodness will depart. It will be a world without the Church and as ineffective as the Church often appears to be there is no way to imagine what it will be like to live in a world with absolutely no goodness of any kind and no remorse, guilt, shame or pity.

Yes, we are in a war that is constant. Bob Woodward described it in his book Bush At War: “The enemy is relentless, hidden, patient and hates us. The war will not be spectacular large battles but thousands of invisible actions.”  We are in a war of restraint against deception, delusion and anarchy – and the greatest weapons are truth, righteousness and prayer. Our continuing responsibility is to fight the battle on the front closest to where we live and fight for each other whenever delusion and deceit break through. Evil does not overwhelm. It works to make us prefer the lie and break the heart of God. Evil breaks the door down only as a last resort. It much prefers to be invited when people willingly exchange the truth of God for a lie.

So, Paul’s constant admonition to the Church is not to focus on fear or evil but pay attention to our responsibility to restrain evil and take care of each other.

Every single good deed and good word is a sandbag. We have hope and eternal encouragement. Do not fear. Fill sandbags.